In Nature - Wasps, like bees have been around on earth for 30 million years, worldwide there are thousands of wasp species recorded, in the UK we have distinct groups of wasp species: solitary; social; and others that behave in a cuckoo-like fashion parasitising other wasps nests, much like the cuckoo bees described in the Bee Species page. All female wasps have the ability to deliver a sting, the males don't have this ability. The solitary wasps are the most numerous species, while the social species are the ones we are most likely to notice and include the Vespoidea species that can become troublesome around the apiary. They all feed on nectar and juices from flowers and fruits, and nurture their brood on insects. Their tongues are much shorter than bees so can only feed on easily accessed nectar or juices in flowers or fruit, and they have no ability to collect and carry pollen back to the nest. Wasps come in many different sizes and shapes, from the larger 'Hornet' to small 'Sand and Digger wasps'. There are many species of wasps, the following are some of the more common species.

Taxonomy - Looking at where wasps fit into the big picture of Nature on our planet, gives us an idea of what they are, where they fit, and what their business is. Wasps are classed as living organisms belonging to a family of other related organisms collectively called 'Aprocrita - which includes wasps, bees, and ants, and are further classified into three distinct groups of wasps.

Wasps are close relatives of the bees and ants, they are flying insects that have a distinct form like the bees, with an ovipositor (egg laying apparatus) which is modified to deliver a sting however, their sting is barb-less meaning they can sting repeatedly unlike honey bees that die after stinging.

Vespoidea - are social wasps distinguished by their habit of folding their wings longitudinally when at rest, and include what we know as the common wasps 'Vespa vulgaris' and 'Vespa germanica', the tree wasp Vespa sylvestris, and the hornet Vespa crabro.

Comparison of the common wasp species, note the folded wings and distinctive markings. Included in the image is the 'Paper Wasp' Polistes dominula which has recently arrived in Southern parts of the UK from its native Southern Europe range.

The Common Wasps are distinguishable apart by their face markings, V. vulgaris with a black 'anchor' mark on the head, and V. germanica with three black dots. They are common across the UK and live in organised social groups and have a life cycle much like the bumblebee, with the colony dying out at winter leaving only fertilised young queens to overwinter. The young queens appear in late spring when the temperature has risen sufficiently, and build a small nest about the size of a golf ball using wood fibre and saliva. The nest contains a single layer of approx 8 - 10 cells into which she lays eggs, which when hatched will be fed chewed up insects. In about another month this first brood of workers will emerge to take over all nest building, foraging, and nursing duties, leaving the queen to egg laying duties. The nest will continue to grow in size as more and more layers of cells are constructed and may reach the size of a football housing up to 2000 wasps, and may be located in the ground or in a roof space, or outhouse. In autumn before the temperatures drop newly hatched males and young queens fly out to mate, the males die off with the rest of the nest when winter arrives while the young fertilised queens hide away to hibernate till spring.

The Tree Wasp 'Vespa sylvestris' (now classified as 'Dolichovespula sylvestris'), is very similar to the common wasp in its life cycle and behaviour but is slightly smaller in size, and has a longer face and lacks the distinctive anchor or dot markings. They can build aerial nests in trees and shrubs or underground nests, and are thought to be less aggressive than the common wasp. 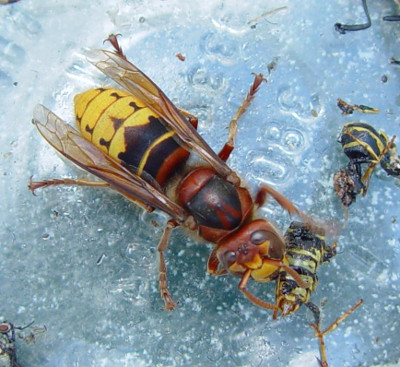 The European Hornet making a meal of a common wasp.

'Vespa crabro' is the largest of the Vespoidea in the UK and despite its fearsome size and look, is the most docile of the wasps. The smallest hornet worker is larger than a common wasp queen, while the queen hornet is about 30mm in length. It's life cycle is the same as that of the common wasps, and nests in hollows in trees or banks in heavily wooded areas. It is easily recognised by its yellow and red/brown colouring, and differs from continental hornets by having a yellow face as opposed to red. They are the rarest of the wasp species in the UK and although they predate on insects, other wasps and bees, they pose no immediate threat to honeybees. 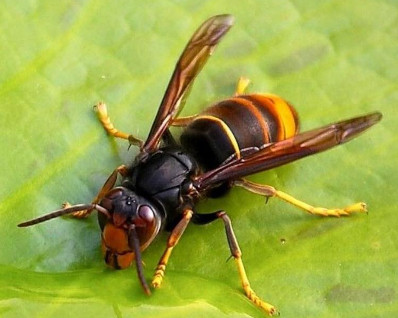 The Asian Hornet, a recent arrival and worrying concern. Not to be confused with the much larger Giant Asiatic Hornet.

'Vespa velutina nigrithorax' The Asian Hornet, also known as the Yellow-Legged Hornet, is a non-native invasive species recently found on our shores and already a big pest in Europe where it arrived in 2004 and spread rapidly. This invader is a direct threat to our native honey bees that have no defence against these predators. In their home region, once the Asian Hornets have found a colony of bees they hawk at the entrance to capture the returning bees, each hornet is replaced immediately by another as the first carries its prey off. But the Asian Apis cerana has evolved to fly quickly past the hornets at speed, and to retreat into the hive, they have also learned to mob an intruding hornet by clustering round it like a ball of bees, and collectively over-heating the hornet to death, behaviours that our Apis mellifera haven't evolved to do. Asian Hornets are slightly smaller than our European Hornet, have distinctive yellow legs and black thorax with a yellow band at the tail end. They are undesirable and sightings should be immediately reported to the government Asian Hornet Watch who will send personnel to find and destroy their nest. Details of Asian Hornet sightings are available at ‘BeeBase’. Monitoring traps are commercially available to place around your apiary, and more info on this species and its management can be found here Asian Hornet.

Pompilidea - these are known as the Spider Hunters, with long legs and big eyes, giving them the ability to race across the ground to catch and paralyze spiders before placing them in cells for their grubs to feed on. They rarely fly further than a couple of inches preferring to use their running speed to catch and sting prey. There are around 40 species of Spider Hunting Wasps distinguishable by their colouring, black with various amounts of red.

Sphecoidea - there are over 100 species in this group of solitary wasps which includes the sand wasps, and digger wasps. They are distinguishable by a collar between the head and thorax, and often a deep division between the thorax and body. They can be coloured completely black to black with red or yellow markings. Their nests vary from holes in the ground or sandy banks, to holes in wood, beetle holes, hard ground and masonry. Nearly all stock their cells with paralysed live flies, aphids or caterpillars to fed the hatching young. One species, the Amimophila pubescens re-opens the cells at intervals to re-stock with another caterpillar and is the only UK species to do this.

Eumeninea - these are the Potter and Mason Wasps, and they differ from the other solitary wasps by building hard cells from clay or small pebbles mixed with saliva, attaching them to stems, or by burrowing holes into soft mortar or window frames and posts. Each cell is stocked with a small paralyzed caterpillar and an egg laid before it is sealed up.

Ichneumonoidea - this is a large group of parasitic wasps (up to 100,000 species worldwide) and includes Branchoids and Ichneumons, they range in size from 6mm to over 100mm, distinguishable by their long thread-like antennae and ovipositor as long as the body. Most can't sting, but parasitise and feed on other arthropods, and inject their prey species with polydnaviruses along with their egg. The virus suppresses the hosts immune system allowing the egg to hatch and develop inside the host, free of any host defenses. Many of the species are considered important for their role in biological control of agricultural and forestry pest species.

Philanthus - The Bee Wolf (Philanthus triangulum) is a member of the 'bee hunting' solitary wasp genus that preys mainly on honeybees (Apis mellifera). At 18mm long it is a large and significant looking insect identifiable by its classic wasp form and colouring, thick antennae, and unusually unfolded wings while at rest. It makes its nest in the soft sand dune and heath habitats of Southern England, the limit of its UK distribution. It is a relatively uncommon species but is increasing in numbers. The genus also includes the Bumblebee Wolf (Philanthus bibcinctus) which is found in the Americas and not present in the UK. 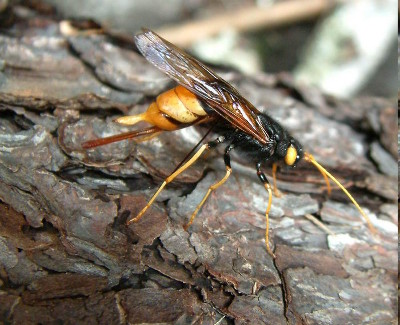 A ferocious looking insect but completely harmless, the 'sting' isn't a sting at all but an ovipostor for egg laying.

There are a few imposters in the wasp world, most notably the Wood Wasp, or Giant Horntail as its sometimes known. This large 40mm long and fearsome looking insect Urocerus gigas, resembles a hornet in its colouring and has a long ovipositor that looks like a stinger, but this insect is in fact a sawfly that is completely harmless. The 'stinger' is actually an oviposter used for laying eggs in soft wood where they hatch and spend up 5 years as developing grubs before emerging.

Hornet Robber Fly - There are 28 species of robber fly known at present and at 25mm long this largest member of the robber flies Asilus crabroniformis as its name suggests is not only a convincing look-a-like of a hornet but is also a ferocious hunter capable of overcoming large prey such as bees, wasps, grasshoppers and beetles by waiting on a perch before pouncing on them as they pass then injecting them with poison. It breeds in animal dung where the hatching larvae feed on beetle grubs. The species is in decline due to chemicals which harmful to the flies being used for animal treatment then passing into the dung.