In Nature - Bees have been around on earth for 30 million years, in the UK we have around 250 species of bee since the last ice age, most are solitary, a few are social, while others behave in a cuckoo-like fashion parasitising other bees nests to breed. They are all distinguished by having hairy bodies, and feed on nectar from flowers, and nurture their brood on a mixture of nectar converted to honey, and pollen. They forage widely on seasonal flowers using their tongues to reach the nectar, with different bee species have different lengths of tongue making nectar in some flowers available to some and not others, competition for resources is minimalised this way. The majority can collect and carry pollen back to the nest using special 'pollen baskets' on their hind legs, those that can't are the cuckoo bees who don't need to, or the small number that collect pollen on their bellies. Bees vary in size from the really big 'Bumble Bee' to very small 'Mining Bees'. Due to the number of species concerned, the following is just an overview of the various UK bee types.

Taxonomy - Looking at where bees fit into the big picture of Nature on our planet, gives us an idea of what they are, where they fit, and what their business is. Without getting too scientific, they are classed as living organisms belonging to a family of other related organisms collectively called 'Apoidea - the bees', which doesn't tell us much, but looking at the hierarchy of species family groups we can see where they fit.

In the Animal Kingdom bees are flying insects that have a distinct form, with an ovipositor (egg laying apparatus) which is modified to deliver a sting. They are close relatives of the wasps and ants, and it is currently understood that they were originally part of the wasp family that fed on insects, but later they evolved to become pollen and nectar feeders, assisting in the pollination of flowering plants, all of which helps define them as bees today.

Beekeepers are generally associated with honeybees, the species of bees that naturally over the summer season create a store of honey in the nest to sustain them through winter, and it is this store of honey that is prized by humans the world over. However bees that store honey in significant amounts are not the only type of bees around, we have many species of bee (Apoidea) native to the UK, and they fall into two very different categories - solitary bees, and social bees.

Mining Bees - There are around 100 species of mining bees in the UK, they look roughly like a honeybee but are smaller, have feeble stings, and are characterised by females burrowing into sand or earth to a depth of 50cm or more, where she makes a cell into which she leaves a package of honey and pollen onto which she lays an egg. She then seals up the cell and goes on to create another 5 or 6 cells before dying. 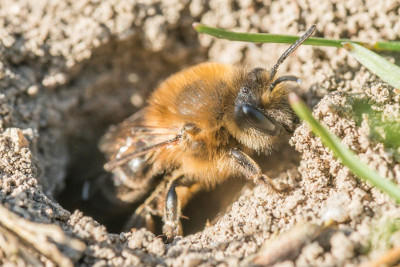 Potter Bees - these mining bees nest in the ground and burrow into walls, and are characterised by making 'clay pot' cells into which they put a honey and pollen package, then an egg before closing the pot up.

Leaf-Cutter Bees - another honeybee look-alike, so called due to their characteristic behaviour of cutting semi-circular sections from the leaves of plants such as roses or rhododendron and carrying them back to their nest burrow in soft wood. They roll the leaf section and carry it length wise under their belly. They also collect pollen on their hairy bellies as they do not have 'pollen basket' rear legs. The leaf sections are used to create cells in the burrow into which she places a package of honey and pollen onto which she lays an egg before sealing with a piece of leaf material, then repeating the process until the burrow is full, her job done. As the larvae hatch they eat their way out and leave, nearest to the entrance first.

Cuckoo Bees - these species don't build nests but rely on the work of other species to build nests, and to provide the sustenance for their young. They sneak in to the host species nest and lay an egg in the hosts cell. When the egg hatches the larvae feeds on the food package and then the hosts egg or larvae. Cuckoo bees have neither pollen basket legs, or hairy bellies, so can not collect pollen or nectar for transportation to the nest. Their lack of domestic arrangements earns them the name 'Homeless Bees', they are much fewer in number than their hosts such as the Andrena spp.

These are the bee species that live in organised social communities, or colonies. These are a common sight around the garden and countryside in the spring and summer, and are a true social species living in an organised community, however they are distinctly different to the honey bee in that the colony only lasts one year, and dies out in the late autumn, leaving only young fertilised queens to find some cozy nook or cranny in which to over-winter. Our common wasp species share the exact same life cycle. 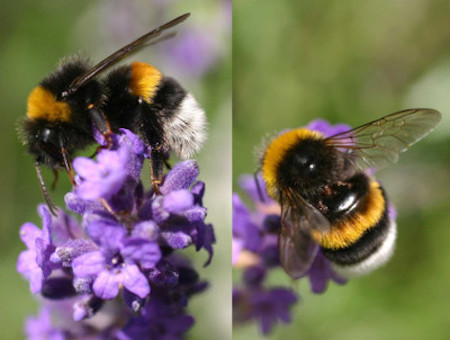 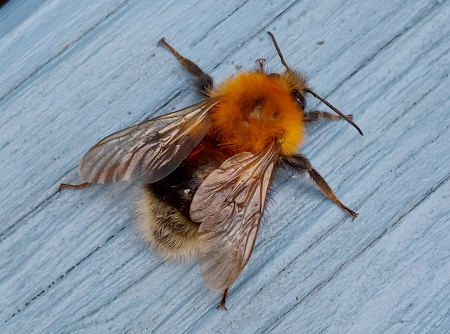 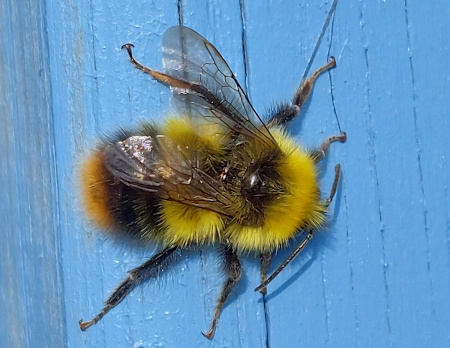 In the spring the young queen will find a suitable cavity and build a small nest and rear half a dozen or so workers who mature to take over all foraging, building, and feeding duties, leaving the queen to do the egg laying. The nest of the bumble bee is not as structurally organised as that of the honeybee, but is made in a convenient cavity such as a compost heap, under the garden hut, a disused mouse hole, and constructed from moss, grass and leaves or other suitable insulating material. It has open wax pot cells in which eggs are laid and honey and pollen stored. At the end of summer the young queens fly out to mate before the whole colony dies out when the winter weather arrives. Young queens are the large bees you see searching around the garden at the first sign of warmer spring weather and are a good sign that spring is well under way.

There are around 20 Bombus spp. of various sizes and colours, most like to nest on or in the ground, a couple (carder-bees) that prefer to nest above ground, and a recent arrival to our shores is Bombus hypnorum, the Tree Bumblebee, that likes to take over bird boxes in early spring. They have long tongues and tend not to compete with honeybees for resources but will try and rob your hive given the chance. Download this Simple Guide to Bumblebees.

Cuckoo Bees - social bee species also include some cuckoo bee species, that not only behave in much the same way as the solitary cuckoo bees described above, but some also closely resemble their host species and emerge from winter after their hosts have already emerged and created their nest and first worker bees. 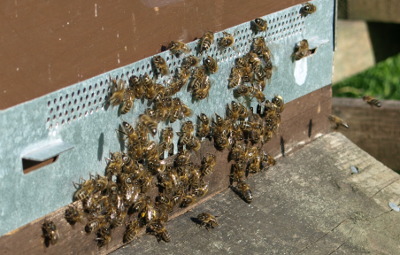 Largely hybridised with other mellifera species, they vary greatly in colour from yellowish to nearly black.

The species we know as the 'Hive Bee' is largely a domesticated species in the UK, with most populations living in artificial man-made hives, although there are studies going on to establish whether there are still wild populations surviving. There is a hope that there are and that they will be closer to the indigenous 'Black Bee' Apis mellifera mellifera that originally inhabited our shores. Their association with humans is due to the significant store of honey they build up in the nest to feed them over the winter months. With careful management crops of honey can be harvested from healthy colonies of bees year after year. Closely related species from Europe such as the Yellow Honeybee Apis mellifera lugistica from Italy, and the Carniolan Honeybee Apis mellifera carnica from Slovenia have been imported over the years to boost populations and honey production and have largely hybridised our UK populations. As a result a variety of different coloured bees can often be seen at the entrance of our UK honeybee colonies.

The honeybee is a true social species, living in a very structured nest, and in an equally structured community of up to 70,000 that evolves and responds to the changes in seasons and availability of resources in a manner that ensures its survival. Individual honeybees only last a matter of 5 or 6 weeks in the summer but by continual replacement the colony survives in strength, even through the worst winters. The colony is headed by the queen who lays thousands of eggs in her 2 or 3 year life, controlling the colony through the release of pheromones. When she weakens, the colony senses this and will take steps to replace her. In winter, the colony stays in the hive surviving on stored reserves and clustering together around the queen and keeping warm. 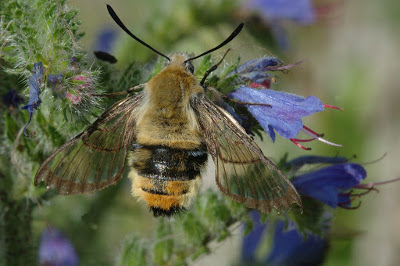 Not everything is as it seems, this bee is actually a Bee Hawk Moth

Just to confuse everything, nature has thrown in a few curve balls, and these are the imposters, the look-a-likes. We know about the cuckoo bees that can look like their hosts, and let the hosts do all the work of nest building and feeding the young, and are parasites of the host species. Then there are the other mimics, that are not bees at all, and do not have any relationship with bees other than looking similar to them or to wasps. Their trick is 'Batesian Mimicry' used to gain advantage by looking like some thing that can be aggressive and that can sting, when in fact they can't. They can look very like bees or wasps with their transparent wings, and their yellow and black striped bodies to the point that it can take a keen eye to spot the difference. The majority of these imposters are the 'Hoverflies' and 'Bee Flies', and are commonly found around the garden and countryside in the summer months. There are more than 280 species of hoverfly in the UK, many are very good mimics, however they have visibly different flying characteristics to bees and wasps, and are able to hang motionless (hover) in the air before darting off at speed. Many feed on pollen and nectar while others feed on aphids and are considered valuable for biological pest control and pollination. Other imposters are 'Bee Beetles', and species of 'Parasitic Flies' that do their best to look like bees, and the Narrow-bordered Bee Hawk-moth Hemaris tityus a day flying hawk moth that mimics a bumblebee when it hovers over flowers but can dart off at speed. This species goes as far as loosing the scales from its coloured wings to make then more transparent like the bees.