As March leaves and April arrives it's a busy time for the bees making the best of spring's full bloom, the colony will try to build up fast and will need space to do that. Keep an eye on tell tale signs of increased activity and for comb building in the eke - a clear sign it's time to put on the supers. Also be on the look out for early drones in milder springs, their presence indicates a colony's swarm season has already started and will require monitoring to avoid unwelcome surprises. Supers should start to fill with comb and honey, and the brood nest will be expanding, but keep an eye on the level of stores in the hive. An increasing number of bees and developing larvae plus comb building in the supers means a higher consumption of food, and supplies can quickly run out if there is more being used than is coming in, especially if the weather is still unsettled, April night temperatures can still reach as low as -10℃ in rural areas. Be prepared to stick on a contact feeder with heavy syrup if you suspect they are running out. Excess honey from last season that has crystallised can be diluted with warm (not hot) water to make a good syrup feed.

Please refer to the Inspection page where full inspections are described in detail.

Observing the front of the hive for a few moments gives a good indication of overall colony activity and status, however April is the time to carry out the years first full inspection if the weather is suitable and the temperature is 15℃ or above. Do this in the middle of the day when it is warmest and when the foraging bees are all out flying. Plan what you are going to do and make sure you have all you will need before opening the hive. There are quite a few things to be on the lookout for during any inspection and especially the season's first. With experience it will become second nature however using a checklist ensures thorough examination and nothing missed. The basic aim of the inspection will be to check for:

A particular spring problem can be that the brood nest has shrunk over the winter months becoming trapped between frames of pollen and honey stores or is off to one side of the hive, usually the warmest, and needs re-arranging. Space to expand on both sides of the nest at this time of the year is important, ensure adequate room for expansion by adding fresh frames between the brood nest and the stores taking care not to split the nest itself as this will result in neglected brood.

Give the entrance a couple of puffs of smoke, then working from the rear of the hive, remove the roof and place it upside down at the side of the hive, then using the hive tool carefully raise a corner of the crown board and put a puff of smoke in then allow a minute or so for the bees to calm before continuing. The trick is to be very gentle with your bees, they do not like sudden movements, impacts, or rough handling so do everything slowly and gently. Next carefully prize up and remove the crown board and place it diagonally on the upturned roof. If you have used an eke or empty super to provide feeding space over the winter, remove it along with any feed and put them to the side. The super, if used, can now be removed using the hive tool at the corner to break it away, place the super on top of the crown board at the side of the hive and place a screen over it to prevent robbing. Now carefully prize up the queen excluder and lift it up taking care to check that the queen is not on clinging to the underside of it. Shake the bees gently off the excluder back into the hive then place the excluder to the side with the other removed components. Use another screen to cover the exposed frames of the brood box, this keeps the bees pacified and prevents robbing. Now you are ready to inspect the brood box, and to find the queen.

Move the screen to expose the endmost frame (left or right) and using the hive tool gently prize it up and out of the hive. Carefully examine the frame for the queen, she is much larger than the worker bees but can be quite elusive. The danger is not spotting the queen and accidentally crushing her or dropping her out of the hive so look carefully. When you are happy the end frame contains only stores and worker bees, place it outside but leaning against the side of the hive. Now you can remove the next frame easily to inspect it, checking for the queen first followed by close examination of any brood present, and the general condition of the frame. Eggs and brood of all stages should normally be in evidence, with blocks of sealed brood with normal cappings. Brood frames that are blackened or older than three years need to be replaced, put fresh replacement frames immediately next the nest. When ready, replace this frame the same way round as it came out, but slide it along to the outer edge of the brood box, creating a gap between it and the next frame.

Refer to the Diseases pages for detail of the tell tale signs of brood abnormalities and pests and what action to take.

You can now remove and examine the next frame repeating the process as you go through the whole box of frames and using screens to cover the exposed frames.Take care not to crush bees and to ensure frames are replaced in their original order and orientation (the structure of the brood nest must be preserved). When you spot the queen, carefully trap and mark her as described below, then release her back on to the frame. Once the last frame has been inspected, gently manoeuvre all the frames back along to their original positions and put the the first frame you removed back in its place. Replace the queen excluder, super and crown board by putting them on diagonally then turning them slowly into position - this greatly avoids crushing bees. You now have a clear picture of what is happening inside this hive and whether it is 'queen right' and is thriving, or needs further attention.

Early Drones - its not unusual to see drones very early in the season, even during March. Colonies that have or are producing drones are preparing for swarming at some point, and it is worth noting that the swarming season for that colony has begun and may require swarm control sooner than later. Refer to Swarming for full description of swarm control.

The beginning of April is the time to put honey supers on but keep an eye on the weather and temperatures which may keep the bees in from foraging when there is lots of brood to feed. Be prepared to put feeders on to supplement stores and aid comb building.

When it comes to colony management and especially artificial swarming, or creating nucleus colonies, it is imperative that you can find the queen. In mid summer, it takes a very keen eye to spot an un-marked queen in among the masses of bees covering the frames during inspections. Some keepers have no problem spotting them but others struggle, and queens themselves never make this easy, they shun the light and will quickly move down and out of site. It may take a couple of attempts but taking the time to trap and mark the queen in the spring means finding her on the frame in summer is considerably easier and much less time consuming when you want to open and close the hive quickly and with the least disturbance. A simple method is to use a queen trapping cage placed over her and after allowing the worker bees to escape, gently press the trap into the comb just enough to keep her still while you put the marking medium on her thorax. It takes a bit of practice to get the queen's thorax lined up in the trap so as not to stick the nylon netting on to her with marking medium. Then after allowing a few seconds for the medium to dry lift the trap quickly off allowing her to escape. This is an important but tricky operation, get the assistance of an experienced beekeeper to help the first times you do this. There are a few different devices you can use for this, some easier to use than others, and you will see some keepers that will catch the queen in their fingers and hold them there while they mark her - it takes a lot of care and practice!

To help you remember the age of the queen, marking medium is available in colours that are specific to years ending in numbers: 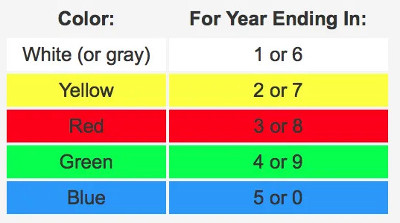 Use colour marker pens or numbered / coloured discs on the queens. Alternatively coloured drawing pins or pegs stuck in the side of the brood box are helpful however you won't know if its the same queen. Using white marker (like tipex) and noting the year and hive number may be sufficient for your needs.

Having completed the hive inspection, it is important to record your findings. It is easy to forget or confuse things you have observed, and things you have done, and the things you meant to do next to one hive, never mind two, three, or eight hives. There are no set rules for what you record but whatever you record will be invaluable to you successfully managing your bees. A diary, notebook, hive record cards, or an online database are all good ways of keeping records. There are IOS and Android phone 'Apps' available for the tech savvy beekeepers, some good, some not so much, and most involve a cost or irritating adds. Which ever system you use will be invaluable to managing your colonies and is a small amount of time well spent. Some of the things you may consider to record are: Colony Number; Date; Weather; Temperature; Activity; Strength; Temperament; Queen Status; Brood; Stores; Space; Disease; Mite Drop; Treatments; Feeds; Next Visit Plan etc.

As April turns to May and the weather and forage opportunities continue to improve the colony will be building up well with slabs of sealed brood ready to emerge in mid May. (Colonies that are not doing well and perhaps are queen-less or need re-queening are dealt with in this section Re-Queening.) Then the newly hatched bees will fill the brood box and the queen will lay more eggs as space becomes available. Drone cells (slightly larger than worker cells and protrude more when sealed) will have been produced to provide males in the colony. The drones are easily recognisable by their larger size and distinctive droning sound and provide few other colony functions than fertilising virgin queens, heating brood, and maintaining moral. Inspections will show that by mid May into June the hive is becoming pretty crowded, with good stores of pollen and honey in evidence, this is a healthy sign, but is also a condition that will trigger swarming behaviour. To avoid losing a swarm, inspections should be regular at this time, no more than 7 days apart, to ensure the signs of imminent swarming are spotted in time to take action. It takes only 8 days for a egg to be laid in a queen cell, hatch, grow, and be sealed over triggering a swarm to fly out and away.