Deformed Wing Virus (DWV) is a disease caused by one the Ifluvinidae insect infecting viruses which is closely associated with Varroa destructor and colony loss. Its name comes from the deformed wings and underdeveloped abdomens on emerging adult bees which is the most obvious signs of its presence in the colony however there are often other less obvious deformities present in developing pupae and emerged adults. Infected bees can not perform normal functions and die soon after emergence and are removed from the nest. The virus also is also known to infect other bee species such as Bumblebees (Bombus spp.)

Varroa destructor is known to carry and transmit significantly high levels of DWV and untreated together they are likely cause colony loss. Much about DWV is as yet unknown however ongoing research into Varroa and DWF continues and has revealed that the virus may cause immune system suppression in bees, affect bee sensory systems, bee colouration, and cause damaged and paralysed limbs. It is also suspected that V. destructor acts as a carrier, delivers concentrated amounts of DWV, and may also be an effective incubator of the virus. DWV can also persist in colonies without V. destructor present, and is passed around the colony through normal feeding activities.

Note: DWV is not a notifiable disease but the associated Varroasis is now reportable due to new legislation (see Varroasis for details). Any suspected incidence of DWV should be treated without delay to avoid colony loss. Inform your local beekeeping association / community to alert them of its presence.

Download the DWV Info Sheet, the Varroa Info Sheet and the Integrated Pest Management plan to obtain a printable versions of DWV and Varroa information, detection and treatment methods for your records. 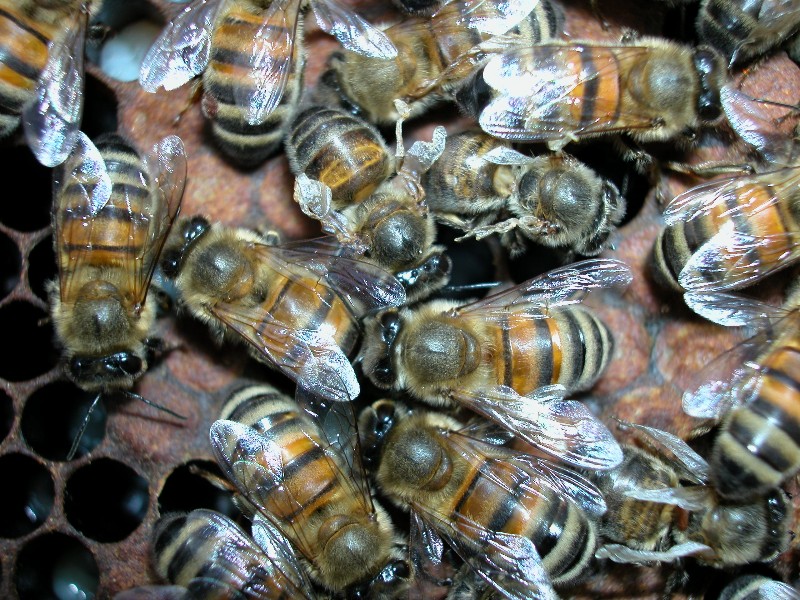 Life Cycle - Little is know presently about Ifluvinidae viruses that affect insects including honeybees, however it is known to exist at low levels in healthy colonies of honeybees with healthy immune systems without apparent effect. Where V. destructor is present it is known to exist at far higher concentrations that colonies struggle to deal with on their own, and untreated eventually collapse.

Hive Examination - Due to the conspicuous nature of DWV deformities, examination of bees during normal hive inspections will reveal its presence. Bees with deformities indicate a high level of DWV infection in the hive that the bees immune systems are not coping with, it is also an indication of a high level of Varroa infestation.

Monitoring - As with all honeybee related diseases vigilance is important. Regular, careful and thorough inspections will reveal levels of DWV and associated V. destructor levels in the hive.

Apis mellifera may be able to cope with low levels of covert DWV in a colony of healthy unstressed honeybees however where V. desrtuctor is present and there are visible signs of DWV deformities treatment should be carried out without delay. Treating for V. desrtuctor will reduce the levels of infestation and associated stress on the colony and will suppress the levels of DWV. Left untreated, colonies of bees will eventually die. Please download the Varroa Info Sheet and the Integrated Pest Management plan to obtain a printable version of Varroa information, detection and treatment methods

Varroa mites cling on to and travel with adult bees wherever they go, and move from hive to hive, transferring to other bees and colonies.