Chalk Brood - is a fairly common disease of honeybee brood and is caused by a fungus Ascosphaera apis. The fungus grows through the bodies of infected larvae sending fine vegetative thread-like growths into the larval body tissues, eventually overcoming and killing the larvae after its cell have been sealed. The disease spreads as the bodies of dead larvae release sticky spores which adhere to hive components and adult bees. These spores are known to remain dormant and infectious for up to 3 years or more. It is not regarded as a serious disease in normal circumstances, its effects on the colony being only slight. It is generally present in the majority of colonies at some point in time and can be present in its spore stage without affecting the colony.

Note: This is a not a notifiable disease however any suspected incidence of Chalk Brood should be remediated without delay, inform your local beekeeping association / community to alert them of its presence.

Download the Chalk Brood Info Sheet to obtain a printable version of Chalk Brood information, detection and treatment methods for your records. 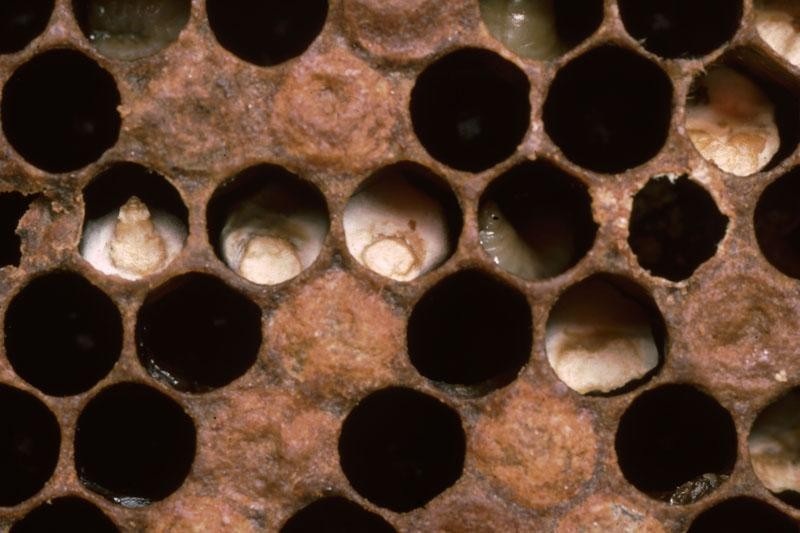 Hive Examination - Examination of brood frames and floor debris is required especially in spring. Bees should be gently shaken from the frames to allow full inspection, abnormalities are then easily spotted. Chalk brood 'mummies' are easily seen and may even fall out of the cells during examination.

Monitoring - Vigilance is important with all honeybee diseases. Check all apiaries and colonies regularly for health and suspect any colonies that are not thriving where there is no already known reason. Colonies that are not performing well or die out should be examined thoroughly and sealed to prevent robbing and spread of any disease present.

Chalk brood is generally present in the majority of honeybee colonies at one time or another. The spores of Ascosphaera apis can be present in a hive and have no apparent effect on it. It is not generally considered a serious disease and the effects on colonies are only slight. There is no specific treatment recommended for Chalk brood. The disease has only slight effect on healthy colonies but may have a more serious effect on weakened colonies. Prevention is the best method of controlling this disease by maintaining healthy, strong and vigorous colonies that display good hygienic traits. Good husbandry contributes greatly to overall colony behaviour and health, thereby avoiding the conditions in which Chalk brood can flourish. Colonies that suffer excessively from Chalk brood may need to be re-queened. Disease prevention is best practice, maintain good apiary housekeeping:

Millions of Chalk brood fungi spores are released from dead larvae, and they can exist and remain infectious for a long time. They are sticky and will attach to hive components, equipment and adult bees.

Note: beekeepers are the principal and most rapid means of spreading brood pests and diseases.