European Foulbrood (EFB) is a serious, contagious, notifiable bacterial disease of honeybee open brood. The cause of EFB disease is the bacterium, Melissococcus plutonius which multiplies in the mid-gut of infected larvae. Unlike AFB bacteria they do not invade other larval tissue but remain in the gut competing for the larvae's food, eventually starving the larvae to death. Larvae infected with EFB generally die shortly before their cell is due to be sealed. As a result the dead remains can be infected with other secondary bacterial invaders causing further disease.

Note: This is a notifiable disease. Any suspected incidence of EFB must be reported without delay to your local Bee Inspector. Inform your local beekeeping association / community to alert them of its presence.

Download the latest Advisory Leaflet from the National Bee Unit, and EFB Info Sheet to obtain up to date information on detection and treatment methods. 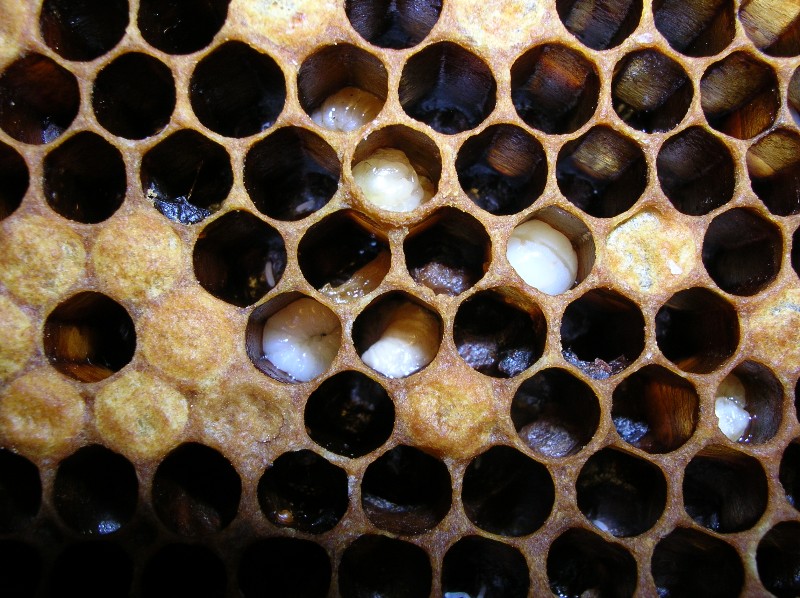 Infected hives show noticeable irregularity in the brood pattern and a change in the normal nose to tail curled larvae position. Dead and dying larvae look abnormally twisted and stretched along or across the cell and may look discoloured and dis-formed as though melted.

Normal larvae are white through, however it is possible to see the gut of infected larvae through its translucent body, the EFB bacteria causing a discolouration of the gut making it visible. The infected larvae generally die before the cell is sealed however larvae can die from infection after sealing. In this instance sunken or perforated cappings are tell-tail signs as with AFB, but the remains although brown and sticky will not produce the same ropiness under test.

In badly infected colonies the brood pattern will appear patchy across the frame as dead brood is removed and the queen lays eggs in the vacant cells. When EFB is accompanied with other secondary bacteria an unpleasant odour can be detected. The dead larvae dry out and form loose scales within the cells. These are quite variable in colour and are rubbery in texture unlike AFB scale which are black, hard and firmly attached.

Hive Examination - Close examination of brood frames in spring and autumn is required to detect EFB. Bees should be gently shaken from the frames to allow full inspection, abnormalities are then easily spotted.

Checking Brood Pattern and Condition - Carefully examine the whole frame by holding it to the light and checking both sealed and unsealed brood for abnormalities such as unusual brood patterns, discoloured larvae, perforated cappings, or loose EFB scales in the cell (completely dried out larvae).

Uncapping Brood - Open any cells with abnormal looking cappings and check the consistency of any dead remains by probing with a matchstick (ropy - AFB, not ropy - EFB). Dispose of the matchstick into the lit smoker, do not disguard it as it will be infected.

If EFB presence is confirmed by SASA (Science and Advice for Scottish Agriculture), many factors are involved and further consultation is required before decisions on action can be taken.The Bee Inspector must consult and pay due regard to the views of the guidance provided by SASA and the Lead Bee Inspector, as well as the wishes of the beekeeper.

Treatment of the infection when recommended is by POM (Prescription Only Medicines) which can only be administered by a Veterinary Surgeon or Appointed Officers. Where the level of EFB infection is heavy a Destruction Notice may be served on the beekeeper requiring the destruction by fire of bees, combs (including any containing honey), and quilts from the hive.

European Foul Brood (and AFB) can spread easily on its own. The bacteria can exist in beekeeping equipment, honey, wax, dead brood and can spread even quicker with the help of the beekeeper during normal hive / colony manipulations. The pathogens responsible for EFB & AFB can exist in a contagious state for long periods of time on infected hive components, equipment and materials.

Note: beekeepers are the principal and most rapid means of spreading European Foul Brood disease.