During the summer a healthy colony will have between 50,000 and 70,000 bees in the hive, dropping down to as little as 10,000 or less during the winter. The main body of bees are the sterile female workers. Their lives go from egg to larvae, to sealed brood, to housekeepers and nurse bees (that stay in the hive) and then to foragers and guards and so on. They will have many different functions at different stages in their relatively short lives, just a few weeks in the summer, to a few months during the winter. Their lifespan is relative to amount of work they must do and to the type of work that they carry out.

The colony functions as one entity responding to changing internal and external conditions, with individuals continually being replaced throughout the season as the older worn out bees die off. At any given time it will have a definite mood to it, when all is going well it will be in a good mood, and when its not they will let you know! 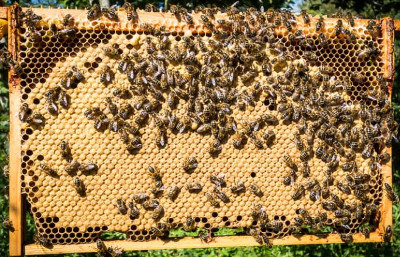 The honeybees nest of hexagonal cells is constructed by the workers from beeswax and will normally fill a cavity of around 40lt (a National brood box is 40lt, a Smith's 35lt). Within the hive brood chamber (the deep) of a fully functioning colony there will be a classic structure, almost like a rugby ball in size and shape, with the eggs and worker brood at different stages of development in the centre, surrounded by stores of pollen, and then honey out to the edges of the deep. (A bee nest in a hollow tree trunk would be longer than wide reflecting the shape of the available space.) On top of the deep will be a queen excluder and a honey super on top of that, the workers will fill this up with excess honey. This is the food they would normally feed off during the winter months. If you harvest this extra honey it will be necessary to artificially feed the bees up before and during winter.

Honeybee eggs are small measuring between 0.7 - 1.5mm long and can be seen with the naked eye in good light. Fresh laid eggs are upright in the cell until they hatch at 3 days. 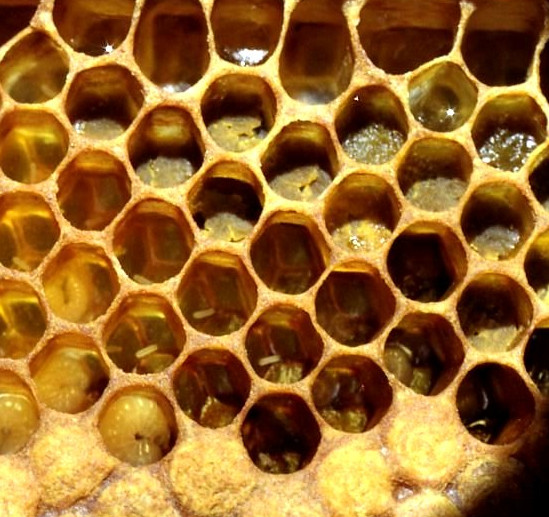 Worker bees produce wax to build the comb in which eggs are laid and honey stored. The queen is capable of laying up to 1500 eggs per day, and will lay in the empty brood cells that the worker bees have cleaned and prepared, one per cell, and will do so continually through the season as long as the conditions are there for the brood to be fed and nurtured. However there are always times when the queen goes ‘off the lay’ for a period when the colony requires it. Workers also build drone cells (slightly larger than worker cells, easy to spot) in the lower half of the brood chamber in the spring so that there is a supply of mature drones around for any virgin queens.

When a queen is weakening or the hive is becoming congested during the season the colony will react by building special queen cells which differ from the normal comb cells and hang out from the comb on their own. This is for the production of a new queen. The existing queen will lay in these special cells and the resulting larvae will be fed special food, royal jelly, and the cells will be made much bigger than normal to allow these larvae to develop into a larger female bee with fully functioning female reproductive parts. It may be that the colony wants to supersede the old queen with a younger one, or that the colony wants to swarm in order to proliferate and create more space. If, when the new queen cells hatch and there are more than one young queen emerging, then there will be a fight to the death between them and the strongest will prevail. 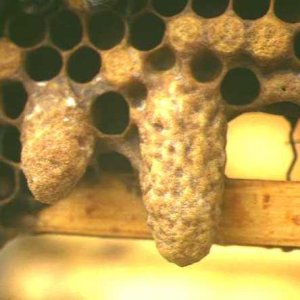 Queen cells are easy to spot resembling a peanut husk in size and shape.

Once the young queen has hatched she must leave the safety of the hive for a mating flight. She will fly out on a good day to a 'drone zone' and mate with several drones before returning the hive to start laying. Once mated she will not have to leave the hive again unless the colony decides on replacement or by swarming. Queens are always at risk during mating and swarming.

Colonies that are not performing well, have undesirable traits, are prone to diseases, poor hygiene etc. should be re-queened from a known source with better tendencies. The colony itself may make this decision and supersede the queen on its own, otherwise the beekeeper will need to carry out the task and there are a few methods to chose from. All must be carried out when there are mature drones around, and when there is enough season left for the new queen to mate, start laying, and produce a satisfactory work force.

Grafting - a tricky process involving creating artificial queen cups and removing a 12 - 18 hour old larvae from its cells and placing it in the new queen cup to produce a new queen. Strictly for the experienced beekeeper this method requires special tools, skills, and a steady hand!

Cup-Kit System - trapping the queen in a special container with 100+ removable cell cups, then transferring 10 or so cups with eggs to a frame with cup holders on two bars. The workers feed and draw out the queen cells which when sealed can be removed for use as required in a colony, nuc or mini-nuc system e.g. This method can produce extra queens to trade with other beekeepers.

Transferring Queen Cells - using a sealed queen cell naturally produced by a known colony at swarm time, carefully cut a good sealed queen cell out and fix it between the top brood bars of the recipient hive. If the original queen is present the colony will decide to use the new queen or not. Otherwise the original should be removed before the cell hatches. This method is used widely to replace queens every two years.

Emergency Queen Rearing - where a colony has shown good tendencies but the queen is old and failing, simply remove her from the hive ensuring there are fresh eggs present. The colony will quickly notice the queen gone and will set about creating a new queen from a fresh egg and draw out a queen cell around it. This method can produce very good queens.

All these methods allow the beekeeper to select the source of the new queen, choosing colonies with the best traits. The only down side however is that while the beekeeper can chose where the queen cell comes from, he can't chose the drones that will mate with the virgin queen, that is down completely to chance, but the odds are that the strongest and most virile drones will be successful in mating.

This is how honeybees proliferate. A good healthy colony will fill up with bees during the spring months and by June it may be bursting with bees. This being the case the colony will naturally produce queen cells as previously described, and when the fully developed grub is sealed over for pupation, this signals the old queen to leave the nest along with all the flying bees (having loaded up with honey first), leaving the rest of the non flying bees, brood, the remaining stores and as yet unhatched queen in the hive. The swarm will set down somewhere nearby and then send out scouts to find a new home, to start all over again. In the meantime the the hive has a virgin queen hatching out that needs to successfully mate and start laying as soon as possible to replenish the numbers.

Losing a swarm out of the apiary is undesirable for the beekeeper because it seriously depletes the parent colony strength and productivity, and a lost swarm is an incredible waste of resource. When a swarm leaves the hive it is hit or miss whether it successfully finds a new home or not, there is a good chance it won't and may eventually perish. Ideally a vigilant beekeeper will be on top of this and be able to artificially swarm the hive before this happens, keep colony strength in tact, and all going well increase the number of colonies. To do this it is necessary to regularly check hives during late May, June, early July for strength, space, queen cells etc. June is the busiest month for a beekeeper. Refer to the June / Swarming page for full details on swarm management.