Scotland is at the northern end of the British Isles, positioned just off the west coast of mainland Europe, out in the Atlantic Ocean. This geographical position, the ocean currents and prevailing winds greatly influence our climate and weather, which is classified as Temperate / Oceanic. Temperate due to its line of latitude position, and Oceanic due to the influence of the Atlantic Ocean. At a latitude of between 55 - 62 degrees north, weather and temperatures might be expected to be the equivalent of those found at a similar latitude across the ocean in Canada, but the influence of the warm Gulf Stream current means that instead of temperatures similar to those of Labrador and Newfoundland in January (between -1℃ and -9℃, the average January temperature throughout most of Scotland is between 1℃ and 10℃, and the average for July between 10℃ and 20℃.

To further illustrate our unique weather, the Shetland Islands which lie 170km (106 miles) to the North of the Scottish mainland, are further North than the Southern tip of Greenland, but experience a much milder climate. 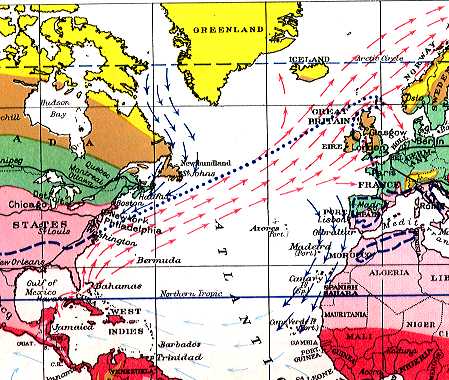 The illustration shows the warm Gulf Stream current that originates in the Gulf of Mexico and travels north east across the Atlantic to warm our shores all year round and influence our weather patterns.

The prevailing winds we experience are from the west or south-west, bringing annual rainfall ranges from over 60 inches in the west to less than 20 inches in the east. The winter months are usually the wettest of the year but heavy rainfall is becoming more frequent during late summer. Winters are not particularly cold but usually quite wet, and when snow falls it is mainly away from the coast and on higher ground. In winter north-east winds in particular can bring prolonged low temperatures, the record low temperature for Scotland being about minus 28℃ . 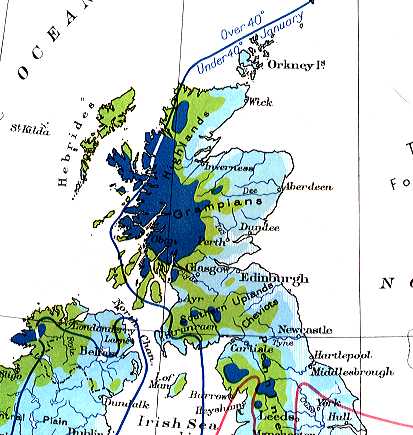 The figures above are average and show the general weather pattern, however there is much local variation due to altitude, topography and distance from the coast, global warming, but the overall picture is one of drier weather in the east and wetter weather on the west.